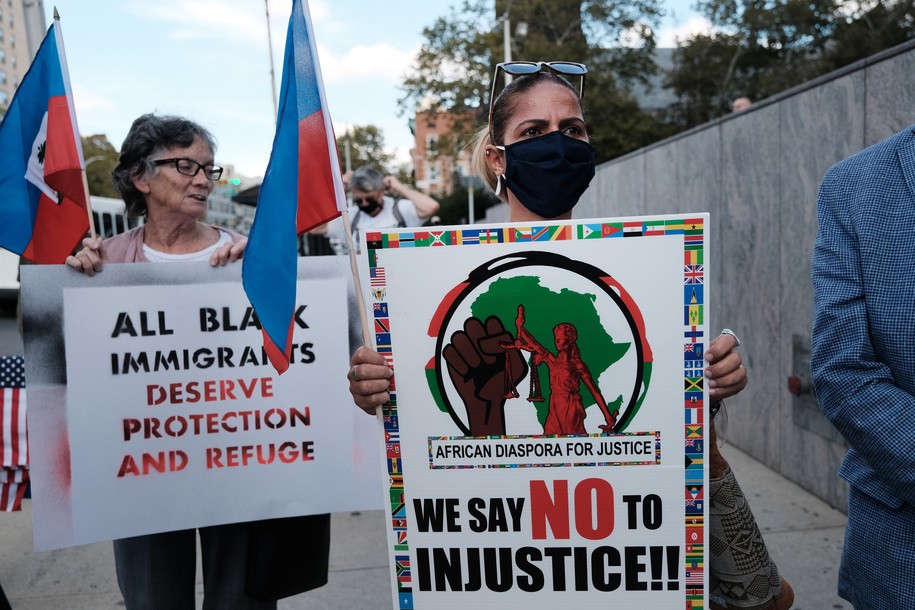 “Through the first letter, advocates succeeded in prompting ICE to grant pro bono attorney Allegra Love access to provide an in-person legal rights presentation to a group of detained Haitians,” Love, Innovation Law Lab, National Immigration Project, Haitian Bridge Alliance, the American Civil Liberties Union (ACLU) of New Mexico, and the American Immigration Council said in a statement. “However, ICE has failed to comply with five additional demands, all of which are in line with minimal standards of access to legal support.”

“The unmet demands include halting the deportation of Haitians until they have had an opportunity to consult with counsel and ensuring their access to confidential legal calls to counsel and to the pro bono legal hotline run by the El Paso Immigration Collaborative,” they continued. “ICE’s refusal to meet these demands reveals its commitment to harming and deporting Black Haitian migrants at all costs, and amount to racist discrimination.”

The statement notes that detained Haitians have further been physically assaulted by guards and denied necessary medications. Meanwhile, requests for release due to continued novel coronavirus pandemic risks “have been either ignored or arbitrarily denied by ICE,” including one instance where a request was denied just minutes after it was submitted. “These conditions make clear that even if advocates’ important demands for access to legal services are met, Haitians’ wellbeing and legal right to a fair immigration process will continue to be denied until they are released from immigration detention.”

Advocates requested a written response to the letter by Monday evening. It’s unclear whether there has been one. What has long been clear is the disproportionate harm faced by Black immigrants under the U.S. immigration system.

Refugee and Immigrant Center for Education and Legal Services (RAICES) said in a 2020 report that in just one example, Haitians eligible to fight their cases while on bond have had to pay thousands more than other detained immigrants. “Between June 2018 and June 2020, the average bond paid by RAICES was a whopping $10,500. But bonds paid for Haitian immigrants by RAICES averaged $16,700, 54% higher than for other immigrants. The result: Black immigrants stay in ICE jails longer because of the massive disparity in their bonds.”

This injustice risks returning Haitian asylum-seekers to a country that the U.S. government has told Americans is too dangerous to visit. The State Department has issued an alert urging American citizens to leave Haiti as soon as possible, warning the U.S. embassy there “is unlikely to be able to assist U.S. citizens in Haiti with departure if commercial options become unavailable.”

“Many in the U.S. have no idea that our government is running what amount to black sites designed to isolate and deport migrants,” Innovation Law Lab Immigrant Justice Corps Fellow Casey Mangan said earlier this month. “ICE has forcibly disappeared Haitian asylum seekers at Torrance, holding them in terrible conditions and hiding them from pro bono attorneys in an effort to swiftly send them back to a country reeling from a violent political crisis, earthquake, and powerful tropical storms. This is not how we believe the U.S. should treat anyone, including Black migrants seeking safety. As long as immigration detention exists, we will join people in their fight for freedom.”